On January 10, 1984, Joe transferred to Engine 3. Joe quickly rose through the ranks starting with 2nd Lieutenant in 1986 and becoming Captain of the company in 1989. Joe was also Chairman of the Food Committee for the 1996 Nassau County Parade and Drill. He served as Company Trustee for many years and represented Company 3 as Warden from 2008-2010. The Chief’s office bestowed Joe the distinguished title of Honorary Chief in 2017 for his continued hard work and dedication to the department.

Honorary Chief Tartaglia has been a driving force in the Company and Department for 5 decades, as a Line Officer, Chairman of committees, and one of the Top Responders of fire calls each year. His dedication and commitment, along with his positive attitude, are unrivaled by his fellow firefighters. To this day you can still see Chief Tartaglia running into to the firehouse for a call and donning his turnout gear or driving one of the engines. 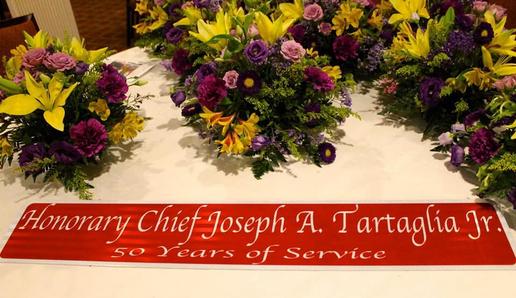