Second Round of Partnership

Since 1976 the Mineola Junior Fire Department has been introducing the youth of Mineola to service to their community. Until recently that service rarely left the borders of Mineola but a dedicated group of juniors and Firefighters sought to expand the department’s horizons. In July of 2007 an historic event took place. The FFSTELLINGEN-HAMBURG JUGENDFEUERWEHR a German Youth Fire Brigade, came to Mineola. This marked the first time that a German Junior Fire Department has ever made a visit to America. The purpose of the visit was to allow the youths from both countries to experience each others cultures and of course to participate in firematic training. The ground work for this visit was laid over the course of the last year with visits by German firefighters to Mineola and Mineola firefighters traveling to Germany to foster the exchange. When the arrival day came, some of the members were apprehensive that the language and cultural differences might make the interaction difficult. The fears were quickly put to rest as the teens from Mineola and Hamburg instantly connected. By the end of the ten day visit, the experience had created lifelong friendships.

The German Juniors were met at JFK Airport by a contingent of Mineola Firefighters and Juniors. Ironically, the Plattedeutsche Park was holding their Volksfest that night so both Junior Fire departments traveled to Franklin Square where they were given a heroes welcome. It was here that the bonding began with teenagers joking around learning each others language and experiencing each others foods. The following morning our German guest began touring Mineola and made a stop at the Nassau County Supreme Court. No translation was needed as Judge Ute Wolf Lalley, the highest-ranking official of German descent welcomed them to her courtroom in their native German language. After a tour of the Nassau County Firefighters Museum and the Cradle of Aviation Museum it was time for lunch at Paradise Island in Williston Park. That night the three companies of the Mineola Fire department provided instruction on American Firefighting techniques. The German Juniors paired up with Mineola Junior firefighters to participate in the drills. Language barriers were not an issue as the universal language of firefighting took over.

On the Third day the Juniors from Mineola and Germany were up bright and early and heading towards the Adirondacks. They traveled to the Great Escape Amusement Park in Lake George were they spent the rest of the day. Over the next few days they toured the Lake George region enjoying water parks, Go-Karting and Laser Tag. Laser tag was a big hit as it is not often found in Germany. They rounded out their trip upstate with a visit to the New York State Firemen’s Museum. Back in Mineola, our guests enjoyed a traditional Portuguese meal courtesy of our gracious host Manny Carvalho at Barraida Restaurant.

On the Sixth day the German Juniors ventured into New York City. They traveled around Manhattan on a Circle Line Cruise. Later that day they traveled to Brooklyn’s famous Coney Island were they enjoyed hot dogs before heading over to Keyspan park.. It was Firefighters night and as the juniors watched the minor league Baseball game the highlight came when the Mineola –Hamburg partnership was announced on the scoreboard. The German Juniors also enjoyed the stadium “Wave” as all of the firefighters acknowledged them. From one end of the Island to the other, on day 7 the Juniors traveled out to Southold to the home of Ex-Chief Jack Gayson. Jack and Karen Gayson hosted a poolside Barbeque which was a great time. Ex –Chief Walter Langer and Firefighter Don Franz also arrived with their boats and took the teens out tubing and water skiing.

On day 8 we returned to NYC for a walking tour of the city. The sights included: The Empire State Building, Times Square, Broadway, Central Park and FDNY Engine 34. A solemn and emotional point was the visit to Ground Zero. Ex-Chief Scott Strauss, a Former NYPD Emergency Services Detective recounted the devastation and rescue efforts from that fateful day. On the 9th day it was time to think about the return home and our German guest wanted to go shopping. We headed to Roosevelt Field mall where they had so much fun they asked to return again the next day. That night the Mineola Fire Department hosted a going away party for our German friends. This party was attended by over 200 people including members from five other local Junior fire departments. The German Juniors received numerous proclamations including a presentation from Mayor Jack Martins declaring FF-STELLINGEN-HAMBURG JUGENDFEUERWEHR Day in Mineola. Many other organizations were also on hand to recognize this historic partnership. Several groups provided symbolic gifts to our guests such as Fire Company t-shirts, jackets and hats. The advisors from both Junior Fire Departments joined with Mineola Fire Department Chief Scott Holliday and the Chief of the Stellingen-Hamburg Fire Department to officially sign a partnership agreement. It was agreed that this historic exchange will continue with a trip to Germany for Mineola's Juniors in 2008.

On the Last day we set aside some time to spend with the guests who had now become like family to us. The time came to head back to JFK Airport and we reluctantly boarded the bus to bring them back. As we headed down Jericho Turnpike a remarkable event took place. Passing the Headquarters of the New Hyde Park and Garden City Park Fire departments, their members were standing at attention with the apparatus pulled out. As the Mineola convoy passed by, the brother firefighters sounded their sirens to acknowledge the historic event. All agreed that this was an excellent way to send our brethren back to Germany. Arriving at the airport, both Junior Fire departments spent nearly an hour saying goodbye with hugs, laughs and tears. This marks the beginning of a partnership that is scheduled to extend back to Germany in 2008. Mineola Junior Firefighters will travel there in the summer to complete the exchange 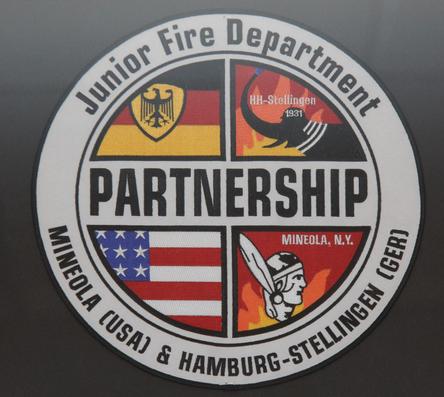 This is the first step of an actual cultural exchange. In the summer of 2007 the Stellingen-Hamburg Junior Fire Department will visit Mineola and in 2008 the Mineola Juniors will visit Germany.

The Mineola Juniors had been working diligently to prepare for this historic trip. Trainings were regularly conducted to maintain their strong base of fire service knowledge. The Mineola community supported the effort by patronizing the annual Pasta Dinner where funds were raised to help offset some of the expenses. As the departure date approached, Uniforms were inspected to insure that Mineola’s Juniors would properly represent our department.

In August 2008, Mineola’s Junior firefighters were accompanied by their Fire Department Advisors as they arrived in Germany. Despite the 8 hour flight they were very excited to be welcomed by the firefighters and junior firefighters of Hamburg-Stellingen. Mineola’s Juniors were able to reunite with the friends they met last summer and began catching up as the itinerary for their next nine days was briefly laid out. Sadly, The trip was absent one of the Mineola Fire Department’s strongest supporters of the Junior program Ex-Chief Walter Langer. Many of the German Juniors had befriended Walter during their visit in 2007 and they wanted to pay their respects to his untimely passing. With church bells ringing, the members of Hamburg-Stellingen held a special memorial to Chief Langer.

The German hosts provided Mineola’s Juniors with a well rounded German experience packed with History, Sightseeing, Firematics and of course FUN. During the course of their stay, excursions included a visit to the Emigrant World BallinStadt, German version of tour Ellis Island, the Reichstag, the Berlin Wall memorial, and the checkpointCharlie that separated Berlin during the cold war. Most of the Juniors agreed that their favorite trip was the visit to Berlin, the German Capital on the Ice Train. Everyone loved the comfort of this high speed train. The Juniors were even a guest of the German parliament and visited the American Consulate in uniform.

The common thread that brought these two groups of youths together was their passion for firefighting. Initially Mineola Junior Firefighters were able to experience the different equipment and technology that the German Fire Service employs. A harbor tour was given on a German fire boat. The Hamburg Fire Department brought their 90 foot boom truck down to the firehouse where all the juniors had a chance to go up in it. Then the Partnership of these two groups brought new meaning to the concept of “cross-training”. A day long training session was held with German Firefighters paid and volunteer plus a few other German junior fire departments. Here the Juniors’ received a lesson in German Firefighting which has some variations and some unique tools. The juniors were given an opportunity to use some of the specialized German Equipment such as a robot pumper that moves along on tracks not wheels. This portion of the training was delivered in German but the language barrier was quickly overcome as the skills were put to work. The German hosts commented on how the Mineola Fire Department had trained their juniors very well and they were impressed with their Fire service knowledge.

As the Mineola contingent made their appearances throughout the historic sights of Germany they also took time for one of their favorite pastimes, shopping. At the end of each day The Juniors would reminisce on the day’s activities. One night, each Mineola Junior was sent out to have dinner with a volunteer host family. Split up individually, they went to meet their German family for the night and had a good home cooked meal while experiencing the German culture. Following this meal, the next 3 days were spent on a camping trip off the North Sea island Sylt. The day’s activities included swimming in the North Sea, playing soccer Football, volleyball and just hanging out with their German comrades.

On the final day with their German friends the Juniors’ did some last minute shopping and then it was time to prepare for the farewell party. What a send-off it was!! Dignitaries, firefighters, and other guests, including the parents and families of our hosts, came together to support the Partnership. The Mineola officers made speeches and gave a present thanking them for their hospitality. Captain Bryan Strauss told everyone that his time in Germany was the first time that he was ever overseas and he certainly enjoyed his time in Germany. Lieutenant Tyler Wolf took everyone by surprise as he did his speech in German The German president of the National German Fire Service congratulated the Mineola Junior Fire Department for making this historic trip to Germany. The president the organization representing all of the junior fire departments in Hamburg praised Mineola Fire Department’s juniors for having the distinction of being the first from America to visit Hamburg in a cultural exchange. The highlight of the evening arrived as a special gift was unveiled. Ex-Chief and head Advisor Gary Mazur had commented on his interest in German automobiles, particularly the Mercedes Benz. In his honor, the Mineola Junior Fire department was presented with a full Mercedes Fire Truck Cab. This unit was originally designed for fire prevention tours but when the Germans heard about Gary’s desire to own a Mercedes Benz, they wanted to make his dream a reality… After all the accolades it was time for dinner and a party given to us by our hosts.

The juniors remained with their German friends late to reminisce about the past ten days. As the trip came to a close, all agreed that the hard work that had fostered this partnership was well worth it.